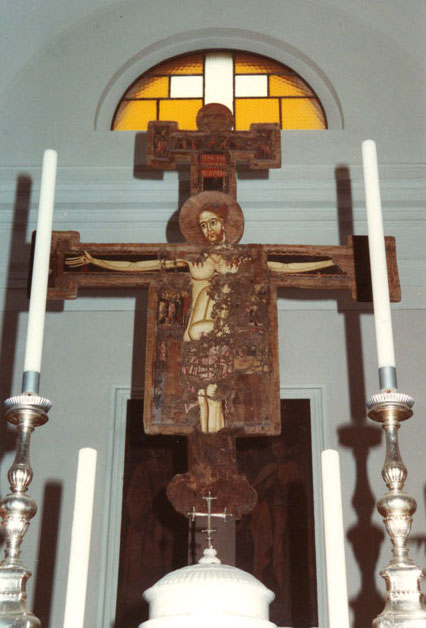 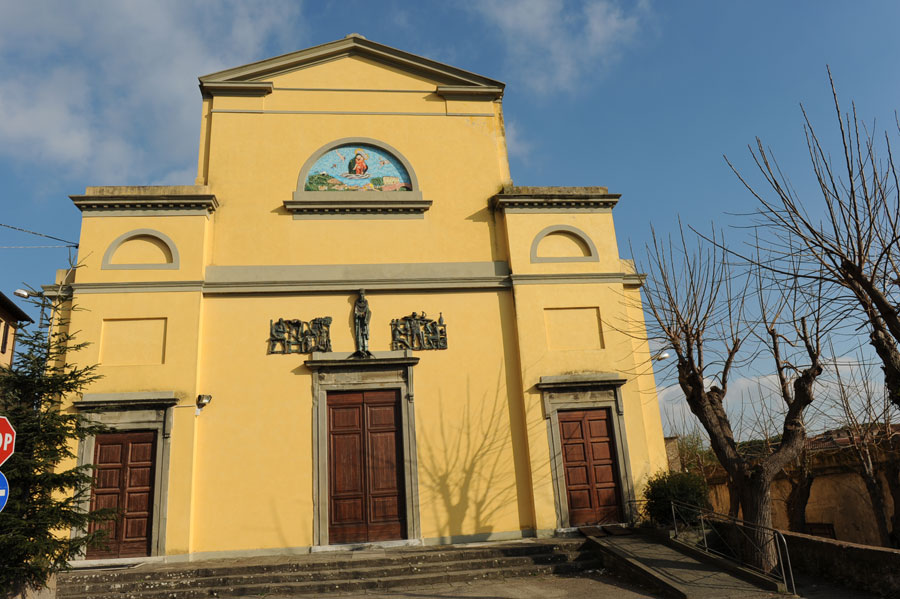 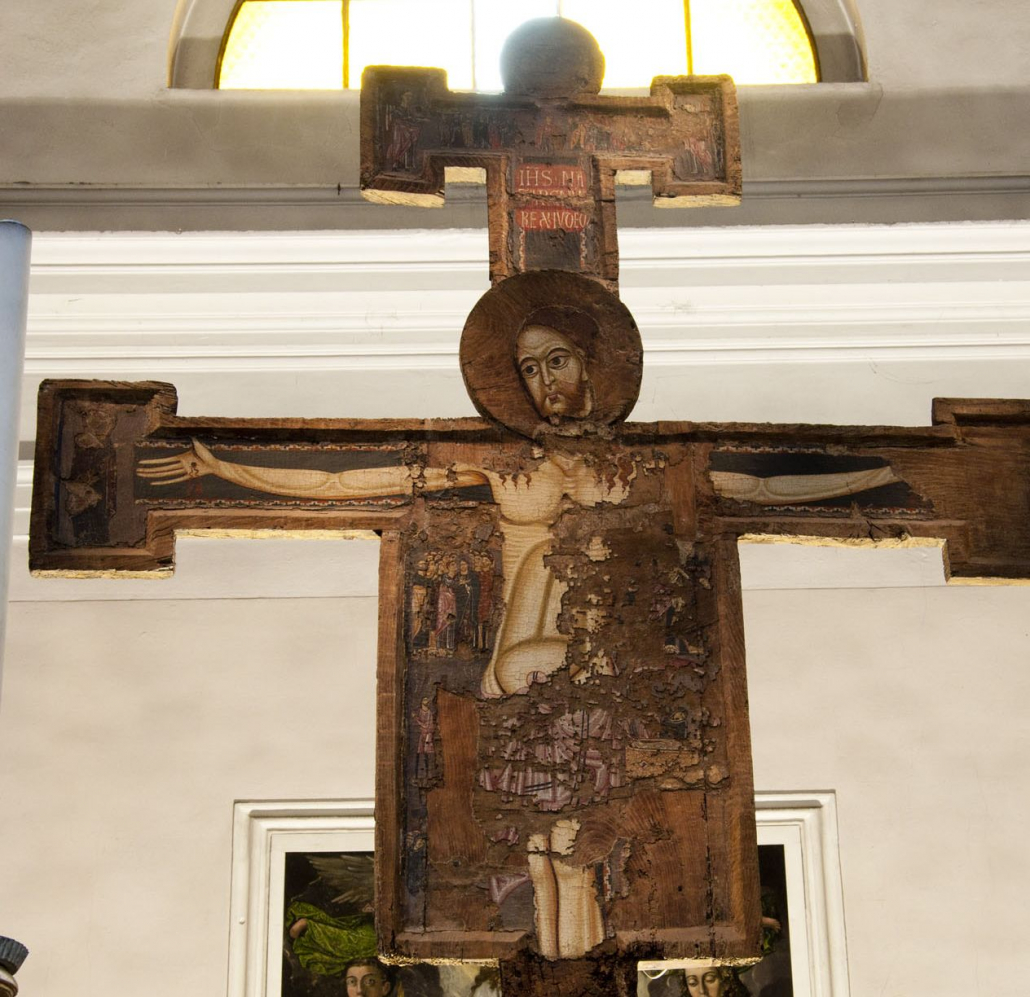 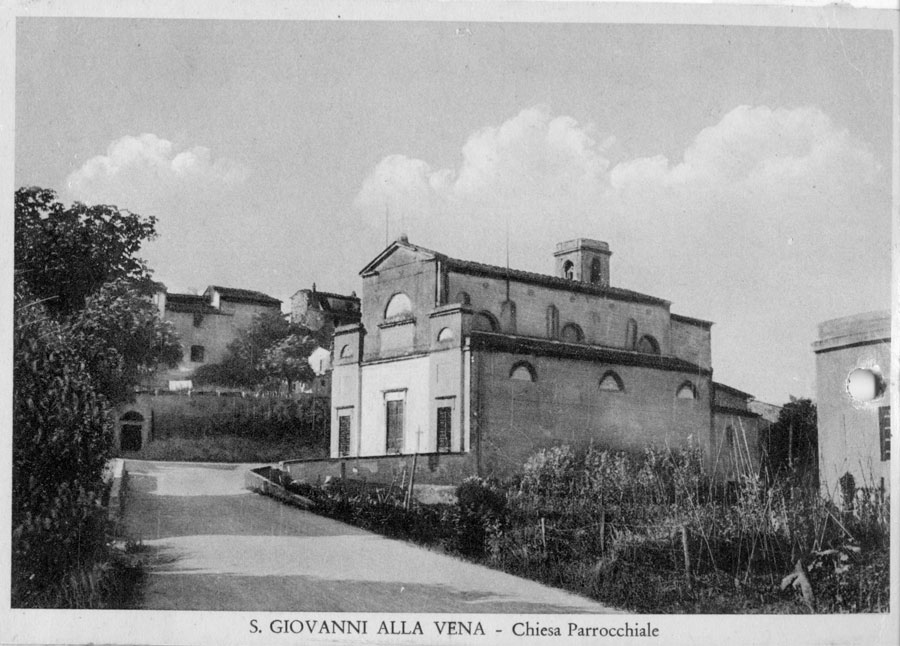 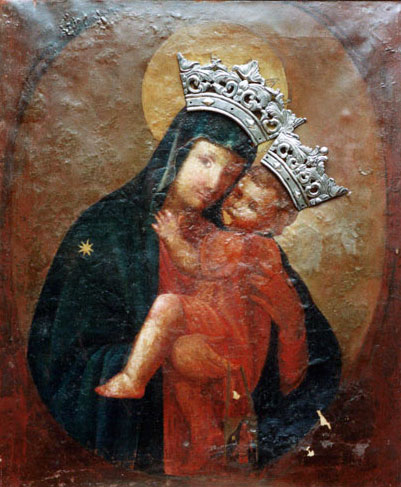 It was first mentioned in a document of 975 that confirms that it was dedicated to the Saints John the Baptist and Peter the Apostle. It originally stood near the Via Provinciale, but was entirely rebuilt later in 1590-93, probably on the present site, after the damage caused by a flood of the Arno. Today's church, however, is the result of a further rebuilding in 1828-40. The façade is divided into two squat lateral avant-corps corresponding to the minor naves and a central one. The bell tower was raised in 1851. The interior presents a nave and two aisles divided by pillars, surmounted by a barrel vault.
.
.

The interior houses many works of art. In the left aisle there is the Annunciation by Giovanni Agostino Guidetti (1770). On the high altar there is a painted Holy Cross by Enrico di Tedice (13th century)); in the choir there are two canvases depicting Faith and Charity belonging to the 18th-century, and a Madonna Enthroned with Saints John and Stephen (16th century), with a view of S. Giovanni alla Vena at the bottom. In the right nave there is a Madonna and Child dated 1686, a Renaissance statue of St Lucy in painted wood, a wooden Crucifix by Andrea Mattei dated 1730, and a 18th-century St Matthew by Giovan Battista Tempesti. The church also keeps a wooden fragment of the painting "Angel Announcing" from the workshop of Nino Pisano and, in the presbytery, there is a 18th-century's painting depicting The Vision of St John on Patmos, by Tempesti.

The wooden Cross is from the mid-13th century and is attributed to Enrico di Tedice, author of other similar works in the Pisan area. The cross is made using a very particular and laborious technique, 'tempera on wood', a painting technique that is characterized by the use of substances such as egg or animal glue as a binding agent for the colors. It was used almost exclusively in the Middle Ages and in the 14th century, but in central Italy it survived until the 15th century. It is usually made on a wooden support, which in Italy was the most used method until the end of the 15th century.